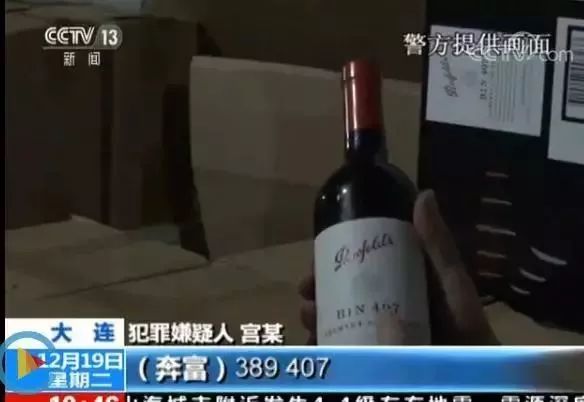 It is reported that in the investigation on Dalian wine market, police found that some retailers sold Penfolds in a significantly lower price. The retail price of Penfolds Bin389 sold by one wine cellar was lower than CNY300, whose market price should be over CNY500.

Dalian investigators then secretly extracted the sales of the company's wine samples, and sent to the authorities for identification, then identified as infringing products, commonly known as fake wines.

Police seized 60,000 bottles of fake Penfolds in some remote area of Shandong province.

Through secret investigation, current reserves of fake Penfolds is extremely larger than expected, all of which are purchased from Shandong Yantai.

In June 15th, the investigation group received news that counterfeiters in Shandong sent a batch of fake wines to Dalian. The police then arrested 8 suspects, seized 2 production and processing factories and 10 sets of production equipment.

Due to good performance of the market, Gong can easily earn a profit of CNY10,000 at home monthly.

Another suspect Li said wine is imported from foreign countries, fake trademarks, bottles, corks were purchased online, then finish filling in through his own production line.

After purchasing these fake Penfolds, the wine cellar sells them through WeChat moments and other social networks, claiming that these wines were parallel imports from foreign country. Such wines were sold about 4 times of the purchase price. Even so, the sales price is still far lower than the retail price of real Penfolds.

One suspect Yang said: the best seller is Penfolds Bin407, whose market price is almost CNY600 per bottle, and our deal price is CNY300.

With the Penfolds brand being accepted by more and more Chinese consumers, the counterfeit problem has come to the surface.

From the beginning of last year, Penfolds brand owner TWE implemented various anti-counterfeiting means in packaging design, so that consumers can recognize Penfolds products and easy to distinguish authenticity from counterfeits.

The new packaging of the Penfolds 2017 vintage, listing not only in the bottle shoulder with Penfolds Chateau badge logo, also printing with English letters PENFOLDS WINES ESTD 1844 on the bottom of the bottle, in addition, each bottle, cork and bottom were marked with tags such as Bin407, Bin707 digital ID.

According to a TWE representative, the details of the brand's unique bottle design will give consumers a clearer guide in purchase.