The latest imported wine data of 2017 has released recently, the report disclosed newest figures from January to December.


In the whole year of 2017 and the four quarter, wine import volume in mainland China are:

In the whole year of 2017 and the four quarter, wine import value in mainland China are:

The increase of bulk wine imports indicates that domestic filling business has increased rapidly under the background of price rise in many wine producing countries. It also reflects the acceleration of substitution in imported wines and covers the decline of domestic wine production.

Sparkling wine value growth is much larger than that of volume growth, which shows that sparkling market of has entered the recovery stage, and products upgrading is obvious, from entry level to medium and high end level.

Sparkling growth was large in the fourth quarter. On one hand, importers were worried about price increase in 2018 and prepared in advance. On the other hand, low temperature in winter lead to the increase, because it’s very convenient to drink without cool it.

In addition, sparkling wine also brings the sense of ritual to winter festivals like Christmas and Spring Festival.

From October to December of 2017, imports value in bottled wine, bulk wine or sparkling wine increased significantly, and far higher than that of imports volume. Most likely, it was based on the reduction of wine production and price rise in 2017.

In terms of volume, from January to December of 2017, the top10 wine producing countries in China market  are: 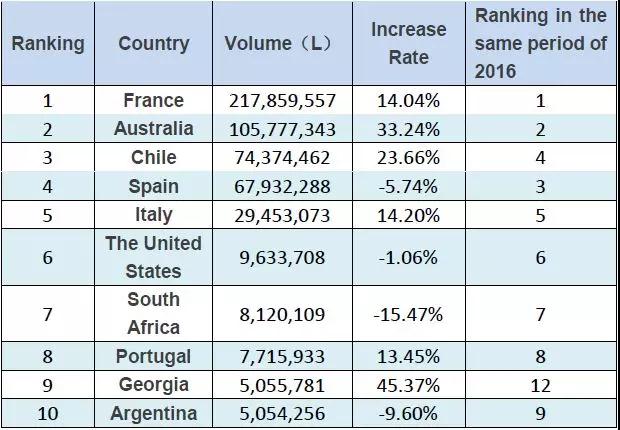 In terms of value,  from January to December of 2017, the top10 wine producing countries in China market  are: 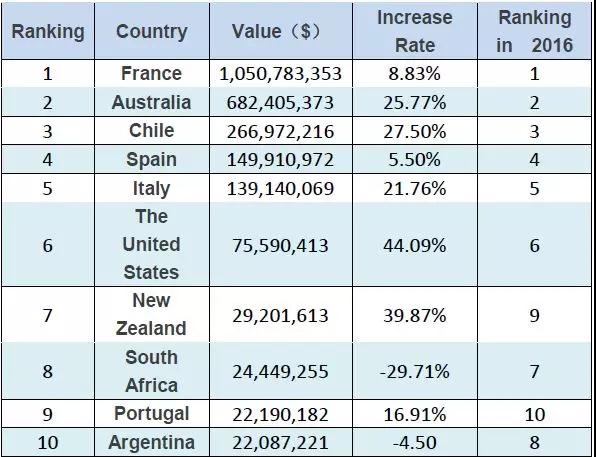 The imports of Chilean wine surpassed Spain, ranking third in 2017. The reason lies in that more Chilean wineries looked to further development in China market and began to push hard in China. The Chilean Wine Association has spread more activities in China, high end wines are gradually letting out and recognized by importers, and wines at 60 Euros per case accounted for big proportion.

The reason for Italian wine import increased obviously is that Chinese consumers are in the growing demands for personalized wine. Profit space of Italian wine can be guaranteed, whose price is not transparent.

The increase of Georgian wine imports lie in its low base, the obvious stimulus of the FTA policy, and the outstanding performance in certain areas, such as Xinjiang.

For the export of bulk wine to China, in terms of volume and value, top10 countries are: 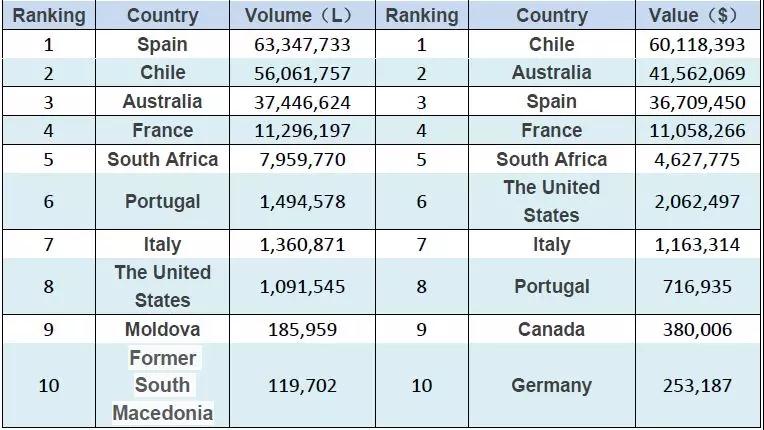 Spain, Chile and Australia are still the largest wine exporters. The entering of Moldova and the former South Macedonia are likely to be supported by the national policy.

In terms of volume and value in bottled wine imports , top10 provinces are:

There was little change in the ranking in 2017 compared to 2016. Although Shanghai is still a provincial unit with the largest import of wine in China, its import volume is slightly higher than that of Guangdong province.

But Guangdong's import value is far beyond Shanghai, ranking first. Because of Guangdong’s close distance to Hong Kong and Macao, it is an important entrance for famous and fine wines.

In terms of volume and value in bulk wine imports, top10 provinces are: